WEP & GPO cut or eliminate the earned benefits of more than 2.5 Million Retirees!

These unfair, outdated provisions of the Social Security code must be repealed.

GET INVOLVED
OR DONATE

Please sign the Moveon.org Petition and Keep the Momentum Going!

If you earn even part of a public pension from a government job that doesn’t pay into Social Security (FICA), you can lose part or all of your earned Social Security retirement benefits.

If you are married to someone who is earning Social Security, you will probably lose all Social Security spousal or survivor retirement benefits due to you from taxes paid by your spouse during the marriage.

An amount up to half the value of your pension can be cut from the Social Security you have earned in other work in which you paid the required FICA taxes. 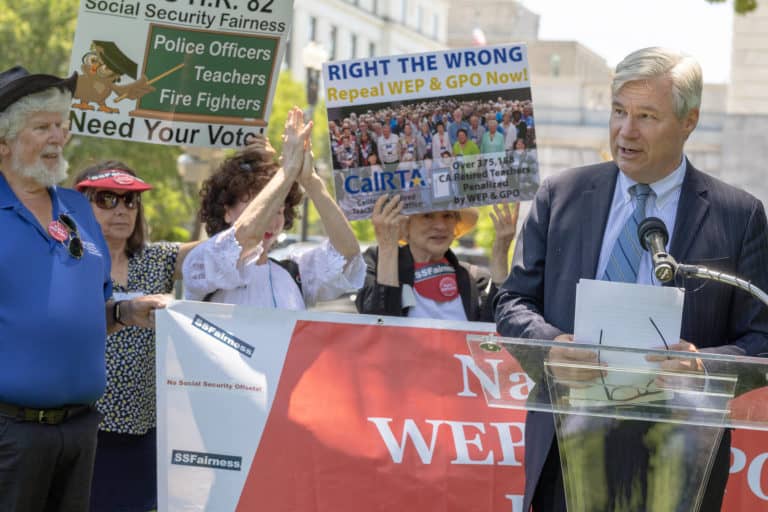 On May 18th, 2022, Task Force members from across the U.S. met in Washington, D.C. for a Lobby Day and Rally.  They visited Congressional offices, and, at the Rally, several members shared their WEP-GPO stories along with encouraging remarks from Senator Sheldon Whitehouse (RI) and Representatives Seth Moulton, (MA), John Larson, (CT) and David Cicilline (RI).

Since the Task Force inception 24 months ago, the Task Force has grown beyond the original Alliance for Retired Americans leaders.  Our rally included members of AFT, AFSCME, NEA-Ret, Social Security Fairness, the Polish American Strategic Initiative, the Polish American Congress, and the California Retired Teachers Association. Police and Firefighter associations were also represented.

A number of members of the two large Facebook groups, “Repeal the Windfall Elimination Provision – WEP & GPO” and “Social Security Fairness – Repeal GPO/WEP”  were present and have joined forces to raise awareness of these poorly-written pieces of legislation and to support Federal legislation to Repeal WEP and GPO!

Donate to our cause
(goes to our Donorbox.org page)

It’s H.R. 82 Again! House Member Garret Graves (R-LA) has introduced a new WEP/GPO full repeal in Congress which was given the same number as last year’s bill….
Tell Senators to Add Repeal to the Omnibus Bill!The Senate Appropriations Committee (list below) needs to hear from us immediately with the request to add WEP/GPO REPEAL to…
For those of you who want the details on our current situation, below is an article explaining the current state of WEP/GPO legislation with one week to go…
CAN YOU STAND UP FOR US AT A RALLY IN WASHINGTON DC, WEDNESDAY DECEMBER 14TH? IF NOT, LET YOUR SENATORS AND REPS KNOW THAT WE WANT FULL REPEAL….